Hi everyone,I am wondering if any one seen the true chocolate parsons,or whether they are available,would like to see a picture!
Top

Someone had some in for sale ad from Perth i think.
Breeding Show Zebra Finches, Blue Gouldians, Pied Orange Breast.
Top

I have seen some recently but they were not really dark chocolate. Do the really dark ones still exist? do any of the forum members have the dark Chocolates or seen them. I mean real dark like Russell Kingston describes in Early bird keeper special edition mag where he had to look closely to distinguish the black bib and trouser stripe from the body colouration.
Top

Just looking around the internet the most distictive one I could find is a Czeck site http://www.idre.hu/poephila/szakallas-amandina.html 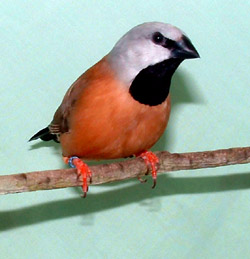 The journal of the Australian Avicultural Society Vol 40 No3. http://www.birds.org.au/cgi-bin/ezyalbum.pl?96 (March 1986) proportedly shows a Chocolate Parson in the cover

Havent got any photos but mine are darker than the one pictured.........I'd like to think they were chocs but alas I cant say I have a pure line from birds taken from the wild in Nthn NSW or far south QLD 30 or so years ago......I understand there are a couple of reputable people with them and know the lineage of their stock.

Might take a while but I'll try to get hold of a camera......bit busy in their flight at the mo, some young out this morning, dont want to go treading on any.
Top

I am far from being an expert on chocolate/ dilute Parsons/ Diggles finches but . .

My opinion is that these birds are not mutations, but rather geographical variations . . or perhaps to be more scientific (?) subspecies

Let's be honest from time to time finches have managed to fly into aviaries . . and perhaps someone managed to find some very dark 'Blackthroats' in his aviary, took advantage of this and marketed them as "chocolates" . .

Before long anyone who produced a bird that in his opinion was a little darker than the 'average bear' sold them as 'chocolates' . . why not, they were worth a bit more (insert your own moral judgment here)

I DO know that Crimson Finches from different areas vary in colour intensity, size, tail length, breast spots, etc . . but anyone who claims to have a "pure X River Bloodfinch" is a fibber or a trapper . . but most keepers of Crimsons would claim purity of species . . ditto Eastern sub-species Star Finch

My theory is that very few/ no pure sub-species of native or exotic finches exist in our aviaries . . they are all 'intergrades' . . and we as finch breeders have to accept this

This of course in no way condones the deliberate hybridisation of one species with another . . for whatever reason

Beginners who intend to become serious breeders, need to learn early the meanings of the terms 'hybrid', 'intergrade', 'subspecies', and 'mutation'

AND (late addition) . . 'hybrid-mutation'
And to come to terms with the morality or otherwise of acquiring "new blood" to keep an aviary species viable . . fauna authorities know the law but they seldom know justice

Arthur
In my opinion you are correct.
Thinking back the race of Chocolate Parsons came from an area North of the Hunter Region.
Alas I doubt if there are any full Chocolate Parsons in our collections today.
The ones we had in our aviaries years ago were virtually chestnut and the chest feathers seemed to have a real sheen to them.
These days if a normal happens to be a little darker it all of a sudden becomes a Chocolate Parson.
Top

I had them many years ago,And breed quite a few.I had to scale down when building house.So the were sent to a breeder in W.A who was looking at concentrating on them.I have not seen many at all around since,And mainly see the diggles around.I believe as well they are geographical variations.
Keeper of Australian Grass Finches
Top

Yep the Chocolate Parson we refer to these days is the "dark form" of the white rump black throat. Taxonomists have argued (as they have done for time immemorial) whether they warrant recognition as a subspecies or not........have a look at all out old texts where the author (say Immelmann) will cite other ornithologist's taxonomic arguement, then put forward theirs.....eg, Immelmann cites Keast as recognising three subspecies of Black Throats:
1. P. cincta cincta - NSW to Inkerman - the type specimen
2. P.c. atropygialis - the Black rump or Diggles
3. P.c.nigrotecta - the dark form of Diggles from Cape York

Immelmann goes on to acknowledge Matthews, who seems to be the ultimate "spliiter" in the taxonomic world. He reckoned there were two more subspecies but Immelmann goes on to make the scientific arguement why the 3 of Keast's suffice for his purposes. Remember, these blokes had no DNA technology, it was all done using classic scientific methods of meticulous data collection, analysis of trends and rigorous peer review.

Shephard acknowledges that P.c.cincta is the Chocolate and that there was a further subspecies P.c.vinotinctus, proposed by some ornithologists which is lighter, therefore not the chocolate.............Russell Kingston recognises only 2, White rump and black rumped

Lets face it, there is huge variation within a species.....Botanists identify Provenances, ie a Blackbutt tree growing at high altitude on the Dorrigo Plateau is massively different in height, form and other ways as those growing in coastal dunes at sea level, say Laurieton on the Mid North Coast..........they're still the same species, will freely interbreed, but its pretty hard for a tree to go wandering and sow his wild oats......maybe not the best example

....but tree breeders pick seed or make clones and hybrids to suit particular needs, eg we source seed from the high altitude ones to grow seedlings destined for plantations in areas subject to frosts.

There is a reference somewhere in the literature that the first birds marketed as "Chocolate Parsons" where a "consignment" which originated from near Tenterfield in 1970. I have heard third hand of one person who has a pure line from birds originating from the wild in far southern QLD during the 1980's so they do exist in aviaries out there......we all lament the advancing years of most finch breeders.......thats not all bad, it could mean there's old blokes who havent bought birds for years with fairly pure bloodlines out there........for that matter, if only one could trace the origins of our birds in overseas collections......there would be some pretty inbred, but pure bloodlines there..........think about how in demand our Cubans and European Goldfinches have become in recent years......our birds in cages, and particularly those overseas, are a valuable genetic store.

......it might not be clear to all that the Chocolate Parson is the nominate race, ie P.c.cincta....it IS the dark form, so maybe back before this particularly dark consignment hit the shops about 1970, the stock held by aviculturists may have been Matthews' P.c. vinotinctus.....ie originating from northern qld wild stock, or mostly Diggles......Bare in mind that Diggles is somewhat lighter than Parson, except for the distinctly darker form of Diggles.....according to all the old authors anyway........It seems logical to me that the early bird trappers (1890's-1960's) would've had easier access to wild stock around Inverell/northern NSW & Sthn Qld....."Chocolate Parson Country"

...maybe someone was around back then & can share........however, I think that for most of us it is academic, and has been for the last 40 years or so...........we buy what we can get hold of, have no idea of the gerographic origins, 30 or so generations since caught, so they are at best intergrades........or more recently and extremely annoyingly, hybrids between dark form black rumps to richen the colour or longtails to intro pied/fawn/white into the captiive black throat population to produce "interesting" colour mutations

One crook way of richening the colour is denying them alot of light & space for a year and they go a bit melanistic....I had a couple necessarily inside in a cabinet for longer than I wanted and this happened

Only way to know now will be to compare dna with early museum specimens......having had a little to do with this in mammals and plants, I think the result will be that many of our captive birds would be suitable matches to original, but many wont............and it may not be obvious to the eye

.......most people arent motivated or have the resources to carefully manage their bird keeping to a standard required for conservation breeding/re-introduction purposes, but some do...............I dont, I get about 30 minutes a day to quickly top things up and tip-toe around trying not to tread on babies hiding amongst the green panic

However, I'm keen though to hook up with anyone interested in southern (white rump, +/- choc) Parsons......

Dano, I tried to contact the person you mentioned in Sydney