Poorly finches, nothing is working

I bought some zebra finches from a breeder and one finch was ill which I didn't notice. and that one died after two months and then another got sick and died a month and a bit later, a third one then got sick and went the same way. Its a never ending cycle where I'm losing a finch per month and it could be more than one that gets ill at the same time next time around. I'm now onto my forth poorly finch inches away from death which is now in a separate cage under a heat lamp.

I'm really hoping somebody can help me because this is very frustrating and I'm near to the point on giving up with the lot.

Symptoms:
The entire flock itch excessively. Most have ruffled plumage, they have all been treated for parasites with veterinary medication, there has been little to no change. They are still itching excessively. My conclusion is a bacterial infection or disease.

They have been treated for yeast infection but the issue remains.

One will end up tucking its head and sleeping a lot.until nearer there death, the color of there beak will fade and there eyes are half shut, once this stage takes place it takes them between one to 2 months to die.

The hens are laying a lot of dead eggs, they all live in an indoor large aviary which is kept clean weekly, no chemicals or toxins are ever used. I only clean with hot water. There food and water dishes are cleaned daily under boiling water.

There previous environment was an outdoor aviary.

Any ideas to what might be the issue? .
Top

Here are some photos of the poorly finch near death. 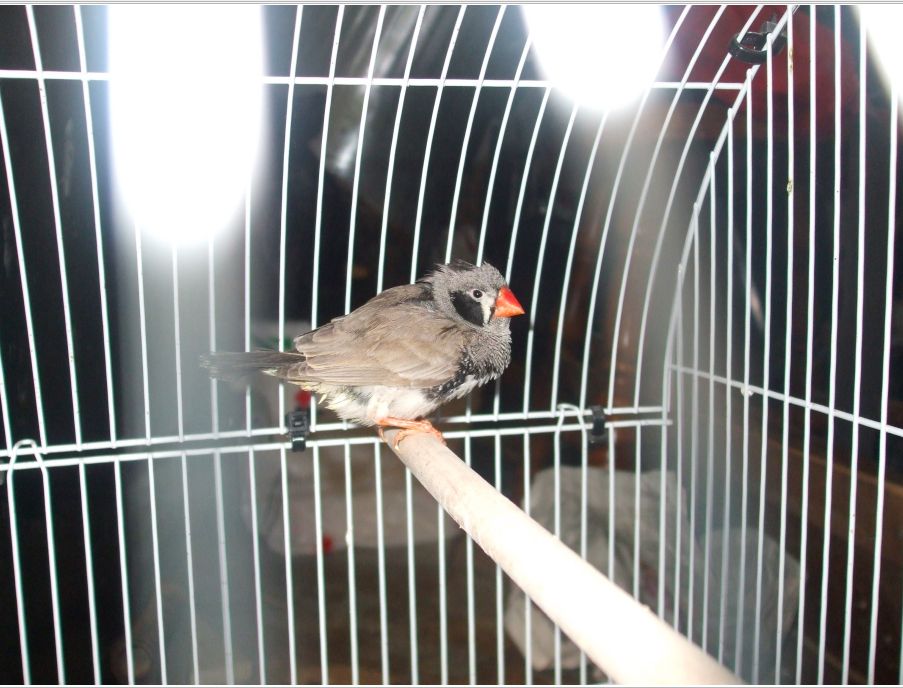 His feathers are certainly scruffy, but his beak colour looks fine to me.
If they will not take greens are they getting Vitamin D in any form?
As having been in an outdoor avairy they would have got this from sunlight before.
LML
Top

That is certainly a factor. He is very poorly he doesn't look as bad in the photo.He has lost his tail feathers, this normally happens in the final stages before they pass away..

Its always best to start with the simple things first like sunlight and vitamin D I think... so I'll start with that.

I have to admit my home does get pretty dark for the most part and having a light on isn't going to cut it. This may not be the cause of the problem but one to start with. I need to find a way of gettting some Vitamin D into them.

I would put some finches outside in a cage to see how they do but the problem with that is my neighbor really likes his spray paint and he often spray paints outside... with paint fumes wafting about outside I don't think it would do the finches much good. I guess I could risk it with a couple in a cage outside to see what results I get over time.

When I got the finches one was already ill so it makes me think that the issue is something else. For now I'm going to keep it simple and start with getting them some Vitamin D.

What can I give them that contains Vitamin D?
Top

As expected the poorly finch has just died.
Top

You could try mixing a little greens into their egg food.
Then see if you can buy liquid vitamin D to administer via their water.
LML
Top

I already tried that but they never touch it and it just goes to waste. They will not eat greens no matter what. Maybe if I took away the seed for a day and just give them a mixture of greens and egg food with some brown rice they might eat it but while they have chicks I don't want them to stop feeding there young if they just want seeds. One more nest box has two newly hatched eggs and the other 3 baby finches have left the nest.

Would a vitamin deficiency make them itch excessively?

I have some reptile calcium powder in a draw... could I use some of that to mix into there food?
Top

OK - strange that they will eat egg food and not greens - goes against everything that is normal for Zebs.

I don't know if Vitamin D will cause an itch - my birds live in outside avairies and eat greens so have never had this problem.

But my birds also dont suffer from itching - so it might.

I tried feeding them greens again and they ate a very tiny amount barely touching it and on the next day they ignored the greens entirely and just ate a bit of egg food and seed. I really need to get them to eat there greens.

The 3 chicks that the parents have been looking after have left there nest, they are grey with grey beaks and seem to be doing well, they'll be eating on there own soon, so that is three extra finches gained. There are two more chicks on the way so hopefully that will be five in total gained.

I noticed some of the birds still have diarrhea which is creamy yellow, no smell. I googled this and got the following... Yellow liquid poop could indicate an underlying disorder in the liver or gallbladder. Bright yellow liquid stool can also be a sign of giardiasis, an infection caused by an intestinal parasite that you can get from drinking unclean water.

There water is always clean and changed daily. I even boil the water the night before, before I give it to my finches because I started to wonder about the tap water. The water isn't an issue.

The above would make more sense because if it was a contagious disease, I would have lost them all at a much faster rate instead of losing one a month.

Conclusion... its most likely a bacterial yeast infection or an underlying disorder in the liver or gallbladder.
Top

It is always possible they were not kept in the healthiest of conditions before you got them. So an internal parasite is possible. Worming with a good all purpose wormer, should solve that. Then your remaining finches and any offspring they produce should survive just fine. Continue feeding a small quantity of greens, curious fledglings are more likely to eat them than the other birds. Best time to learn is now.
LML
Top
Post Reply
41 posts